Telecom Regulatory Authority of India (TRAI) has made DLT registration mandatory for sending Bulk SMS. Every business entity who wants to communicate with its customers via Bulk SMS will now have to register on the Distributed Ledger Technology (DLT) platform.

The growing menace of unsolicited SMS

Mobile users in India are constantly bombarded with spam messages. According to the survey conducted by online community platform LocalCircles, 78% of people said that they receive 4 or more unwanted SMS every day. Further findings stated that 70% people get spam messages even after registering in DND.

TRAI has been actively examining the issue of Unsolicited Commercial Communication (UCC) and has formulated a framework for controlling spam texts. In the year 2007, TRAI set up National Do Not Call (NDNC), also known as Do Not Disturb Registry to curb the growing problem of unwanted calls and messages. Further amendments were made in the NDNC registry which led to the establishment of National Customer Preference Register (NCPR).

Despite imposing strict regulations, the problem of spam SMS is still increasing. TRAI has notified that it has received more than 2 million complaints related to unsolicited texts. On average, approximately 40 thousand complaints are received per month as stated by TRAI.

The image below depicts the rising number of UCC complaints over the last few years. 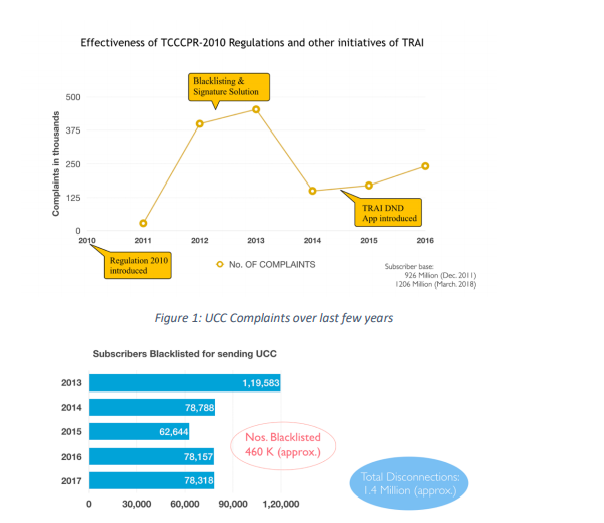 Drawbacks in the current regulatory framework

Due to the setbacks observed in the existing Bulk SMS system, there existed a need for a well-regulated, systematized and transparent framework. Taking care of the end user and safeguarding the consumer interests, TRAI has introduced DLT. Distributed Ledger Technology or DLT is an online panel maintaining the records of Headers, Templates, Customer Preferences and complete details of all entities present in the framework.

This system will be extremely secure as records will be added with a cryptographic signature that will be unique to each entity. Blockchain technology will be used to administer the system thereby ensuring authenticity in the Bulk SMS framework.

Hence, DLT registration is mandatory as per TRAI regulations and every entity will have to get registered on the DLT platform to send Bulk SMS.